While you are reading this post, one thing is going in & coming out of you right now. Air such an important factor. It is the layer of gases, called Atmosphere, which keeps the Earth warm. Without these gases, the temperature on earth will not be stable. 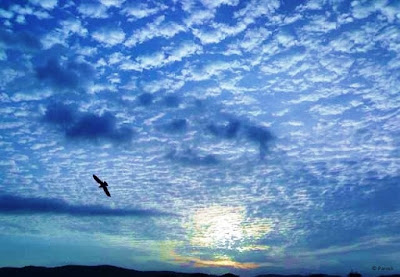 While the oceans contain most of the Earth's water, water also exists as ice and water vapour. Air is important because it helps water move between these states in a process called as the Water Cycle. We all know that when heated by the sun, surface water evaporates into the air and becomes water vapour. As temperatures drop, water vapour forms clouds as it condenses. Clouds return water to the Earth in the form of rain or snow, usually far from the water source. The water cycle ensures that life around the planet receives the water it needs. It also helps replenish streams, rivers, lakes and other waterways.

Being such an important resource, do we respect or value the Air we breathe? Not really… It is sad to know that majority of pollution, be it of air, water or soil, is from man-made sources. The single most harmful source of air pollution is the unchecked burning of fossil fuels by human. Fossil fuels are the non-renewable sources of energy such as crude oil, petrol, diesel, coal etc. & are used in almost every process of industrialisation, manufacturing, transport and energy generation. In rural areas, a major source of pollution is the practice of unchecked crop burning. Another source of man-made pollution is military resources such as nuclear arsenal and chemical weaponry.

The consequences of Air Pollution are hazardous and can be fatal too! The pollutants that cause air pollution in our atmosphere are seriously damaging the protective ozone layer. When the ozone layer gets depleted the harmful ultraviolet B radiation reaches the surface of the earth and causes skin cancer and eye damage among humans. The deadly combination of Smoke and Fog, Smog is extremely harmful to humans and the entire environment. It can lead to diseases such as cold, flu, irritation of the eye, asthma and in the long term even lung cancer. Another disaster Acid Rain is caused when a chemical reaction occurs between air pollutants and water & oxygen very high in the atmosphere. Pollutants such as sulphur dioxide and nitrogen oxide are water soluble and mix with the water in the atmosphere and precipitate as acid rain. The acidic nature of this rain causes severe damage to the plants, animals and the soil.

So how to prevent this catastrophic disaster? & most importantly, how to clean the air??? We will discuss that for sure! But before that, let me tell you another virtue of Air.

Air also plays a vital role in recycling one of Earth’s most important substances: Carbon. Carbon is important because We all are a carbon-based life form and we need it to survive. Carbon sources include fossil fuel combustion, the decay of dead animals and volcanoes. Animals and humans also release carbon dioxide into the air when they breathe. Through the process of photosynthesis, plants extract carbon dioxide from the air and use it to produce energy. They also release oxygen during this process. When people and animals eat the plants, they ingest carbon and produce the energy they need to live. When they die, their bodies decompose, causing carbon to go back into the air as this endless cycle (Carbon Cycle) repeats itself.

Thus, trees are able to absorb Carbon dioxide (CO2) and Carbon monoxide (CO) from our atmosphere and reduce the ‘greenhouse effect’, creating a less polluted, more sustainable world for us and our future generations. It is shown that in one year, an acre of mature native trees absorbs the same volume of carbon monoxide as produced from a 42000 km car journey! Aside from cleaning the air for us, trees supply us with fresh oxygen to breathe. Forests have proven to be an invaluable asset when it comes to improving air quality and reducing harmful pollutant levels in the atmosphere. 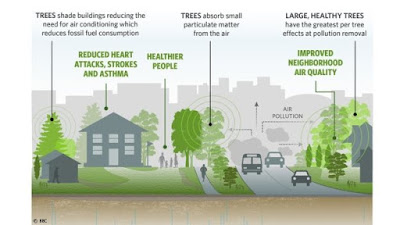 Trees planted in an urban environment can not only counteract the warming effects concrete and buildings have on the environment (known as the Urban heat island effect), but they have also been shown to clean the air and absorb harmful airborne particulates (particularly small particles which are a major health hazard), gaseous pollutants and toxins such as nitrogen oxides, ammonia and sulphur dioxide through their leaves, bark and roots. Trees along urban roads & highways can reduce the presence of fine particulate matter in the atmosphere within a few hundred metres of the roadside verge. This improves the air quality in the microclimate around the trees and contributes to a healthier and cleaner environment overall. This is why we should try our best to ensure that our forests aren’t being lost to deforestation.

We all know that Air contains 21% Oxygen. And the fact we don’t know or underestimate is that Air contains this much oxygen is not because the Earth provided us the atmosphere with that composition, but because trees and plants produced oxygen for over 2 billion of years from Carbon dioxide.

Our Air is a very precious resource. People, animals, plants and birds all depend on clean air to live. Choices we make every day can make a positive difference to our air quality, both indoors and out. Planting native trees is a cost-effective way to tackle urban air pollution, which is a growing problem for many cities. And one must not forget, Trees help us breathe! :)
Posted by Paresh Prashant Phalak No comments: