White Fig (Ficus Virens/लघुपिंपरी, पायर, पाईर) is a moderate to large sized deciduous fig with a spreading canopy. It is a beautiful shade tree wirh dense green foliage. New leafs emerge in March with colors of purple, red & bronze, giving the tree a wonderful look, very pleasing to the eye. The color transformation goes on till April. The aerial roots commonly wrap around the main stem instead of forming props. 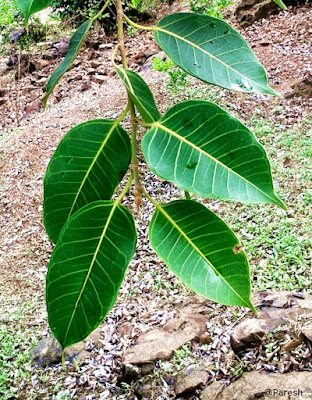 The leaves have similar texture as that of Peepal tree and have a whitish midrib. The stipules are short, measuring less than 1 cm. The pea-sized figs appear in pairs and greenish-white to brown in colour with spots.

It is interesting to now that figs have a unique form of fertilization, each species relying on a single, highly specialized species of wasp that is itself totally dependant upon that fig species in order to breed. The tree produces three types of flower; male, a long-styled female and a short-styled female flower, often called the gall flower. All three types of flower are contained within the structure we usually think of as the fruit.

The female fig wasp enters a fig and lays its eggs on the short styled female flowers while pollinating the long styled female flowers. Wingless male fig wasps emerge first, inseminate the emerging females and then bore exit tunnels out of the fig for the winged females. Females emerge, collect pollen from the male flowers and fly off in search of figs whose female flowers are receptive. In order to support a population of its pollinator, individuals of a Ficus species must flower asynchronously. A population must exceed a critical minimum size to ensure that at any time of the year at least some plants have overlap of emission and reception of fig wasps. Without this temporal overlap the short-lived pollinator wasps will go locally extinct. 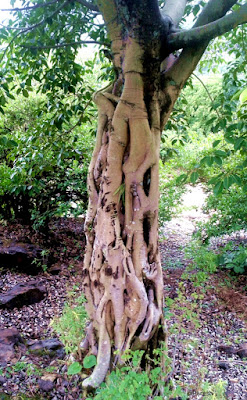 This tree is a fig belonging to the group of trees known as Strangler figs, which often begins life as an epiphyte. The seeds are dispersed by birds which tend to germinate on other trees. They grow to strangle and eventually kill the host tree, thus establishing itself as a winner.

According to Ayurveda, the tree has several medicinal properties to its name. It is known to be useful in treating cough, bronchitis, fever, headache and cold. In folk medicine it is used as a diuretic, for rheumatism of joints and muscles for gout, for bladder and kidney diseases. A decoction of the bark is used in the treatment of leucorrhoea. The herb is used for stomach complaints with hyperacidity, prophylaxis and therapy of stomach ulcers and for diarrhoea in children.

White fig is a potential agroforestry species; or rather in some parts of , it is being used as one. The leaves are used as animal feed. The tannin and dye obtained from the bark has been used in respective industries. The tree is harvested for local use as a medicine, food and source of latex. It is sometimes cultivated as shade tree in coffee plantations. The tree is occasionally used as host tree for lac insects. The fig gives shelter to many birds, insects and arboreal mammals. The leaves are eaten boiled as a vegetable in Northern Thai curries.

White fig is also grown as an ornamental and shade tree along avenues. This tree has become popular as an avenue tree in and around the cities of and Noida. It is suitable for plantation in parks and large gardens.
Posted by Paresh Prashant Phalak No comments:

The Tree with Stars!

From a distance, the flowers may appear like stars or snow flakes on a tree giving a beautiful appearance to the tree. This summer-bloomer is easy to spot either due to the flowers or its typical pods. Sweet Indrajao or Pala-Indigo (Wrightia Tinctoria/ काळा-कुडा, दुधी) is a small, deciduous tree with white, fragrant flowers. Due to its small size, the beauty & medicinal properties, the tree strongly needs to be introduced to urban areas. 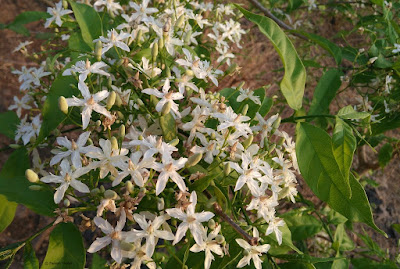 When in bloom, it is one of the spectacular beauties to see. You just can't take your eyes off the tree. The fruits appear in pendulous pairs and coherent only at the tip. The hairy seeds are released as the fruit dehisces.

It is a good agroforestry species as it inter-crop well. It can stand a wide range of soil types and is suitable for arid, semi-arid and moist regions, especially dry sandy sites or hillsides and valleys. The tree parts are known to be used as food in many regions. The flowers, leaves, fruits and seeds may be eaten as vegetables. The branches are trampled into the puddle soil in rice field for green manuring. Thus it acts as a soil improver. It coppices well & grows moderately fast. The leaves are lopped for livestock fodder.

The tree is known as Dudhi in because of its preservative nature. Supposedly a few drops of its sap in milk prevent curdling and enhance its shelf life, without the need of refrigeration. The leaves yield a blue dye called Pala Indigo. 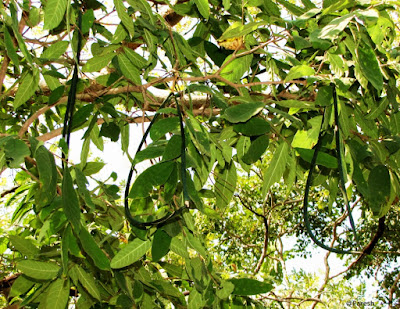 The pods contain floss or cotton-like substance, which is used for stuffing cushions. The liquid latex of tree can be used as a renewable source of hydrocarbons and intermediate energy resources. Latex is also a source of rubber. It is also useful in dyes & tanning industries. 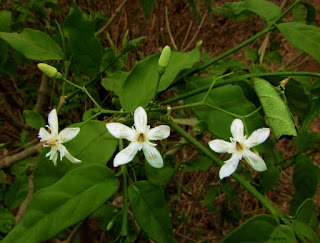 In Indian traditional medicine, the bark and leaves are used to treat psoriasis, stomach pains and dysentery. The seeds are said to be aphrodisiac and anthelminthic. Seeds also yield deep red, semi-drying oil, which has medicinal value.

So many uses and relatively very easy to propagate from seeds. Isn’t it a wonderful species?! A very important & attractive tree for city gardens and tree lovers!
Posted by Paresh Prashant Phalak No comments:

Ironwood tree or Anjani (Memecylon Umbellatum/अंजनी) is a small, evergreen tree with amazing bright blue flowers and with dense, dark green foliage. The tree is a predominant arboreal species in the dry evergreen and semi-deciduous tropical forests along the western and eastern coasts. It is also known as ‘Pride of Matheran’ as it is found in abundance at the famous hill station Matheran, in . 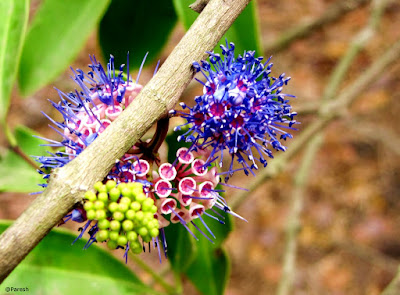 The flowers are mildly scented and are so beautiful that they look almost unreal. The tree produces showy clusters of tiny purple flowers, which are grouped in great quantity in axillary umbrellas, close together and compact, appear in the lower part of the branches having no leaves. The trees bloom once or twice a year and are then indeed a beautiful sight. As the flower petals are shed, the soil below appears purple in colour. May be that’s why the tree is also called Blue Mist tree. 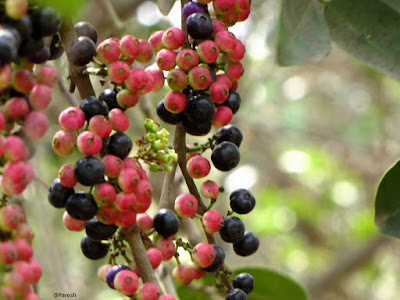 The fruits of Ironwood tree are small, about 1cm and are green, turning red then black as they ripen. The fruits are pulpy, astringent & edible and were consumed in the past during famine periods. The leaf edges look golden if held against light. All together flowers, fruits and leaves make it a wonderful play of colours. 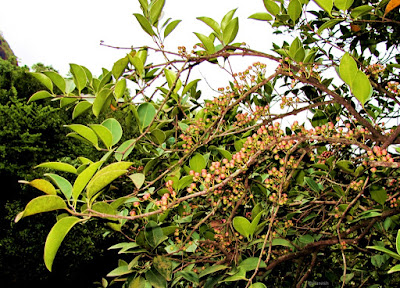 This tree is not only beautiful, but also useful. It provides hard timber used for making boats. Dyes employed in the textile factories are extracted from its leaves and flowers. Although the species is widespread in nature and is much appreciated by the local populations, it is relatively little known in urban localities. It is a tough species having a long tap-root system. It usually & easily reproduces by seeds and the growth is moderately fast. 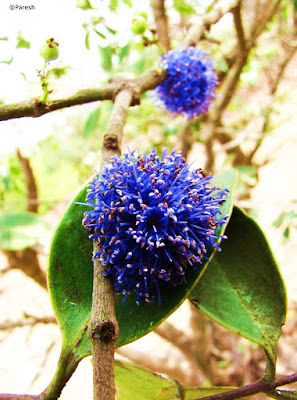 The tree had a long history of traditional uses for wide range of diseases. It has been proved that various parts of the plant were used in traditional systems of Ayurveda to treat various ailments. In recent years it has been experimentally proved that the plant possess analgesic, anti-inflammatory, wound healing, hypoglycemic, antimicrobial, anti-spasmodic, nephro-protective and hepato-protective activity. In Ayurveda, the leaves are used as a cooling astringent and are given in leucorrhoea & gonorrhea. The leaves are reported to possess antiviral activity and also used in snakebite. The seeds are used to cure cough and sedative. Anjani is one of the important medicinal plants used by Paliyan tribes in Sirumalai hills of Eastern Ghats of India, especially for skin diseases.

We should not underestimate its potentiality as Agroforestry species. The tree can be used as windbreaks at farms. Also it does not compete with adjacent plants for water due to the long tap-root. Without doubt, it is an ornamental plant having showy blooming which, almost entirely, covers the branches in the part bearing no leaves. The flowers and fruits are visited by bees, butterflies and birds; increasing its natural beauty beyond limits!
Posted by Paresh Prashant Phalak 1 comment:

In Hindu mythology, it is believed that while traveling to Lanka, the tree sprouted from the drop of nectar that fell from the bodies of the God Rama’s monkeys, which were restored to life by Indra, the supreme king of the Hindu gods. Hence the name Indrajao or Indrajav. Though a well known species in ancient literature of Ayurveda; it is a beautiful and impressive species in first place. Indrajao or Kurchi tree (Holarrhena Pubescens/इंद्रजव, कुटज, पांढरा कुडा) is a deciduous, small tree. 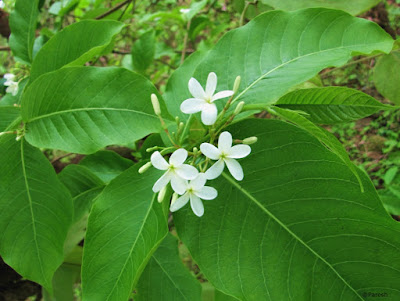 The flowers are aromatic & bright white which turn creamish yellow as they age; with oblong five petals rounded at the tip. White flowers appear in corymbose cymes at the end of branches. Profuse flowering can be seen from April to July. Fruits are paired, dehiscing follicles hanging from the stalk.


The flower of Indrajao reminds one of an introduced genus Plumeria, commonly known as Frangipani. But similar appearance can not guarantee the virtues. An introduced species is introduced after all. How can it compete or even match the goodness of native Indrajao..?! 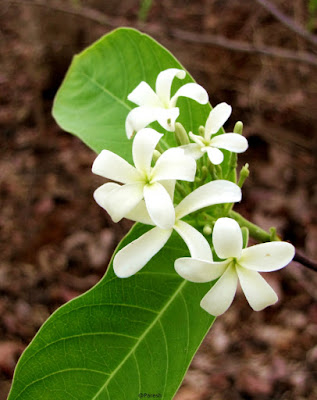 Widely known in Ayurveda by the name Kutaja; its numerous healing properties has been mentioned in the Vedas. It has been used to treat several gastro-intestinal diseases for hundreds of years and is still used by several Indian tribes to cure ailments like epilepsy, anemia, skin infections and cholera, apart from digestive problems. It is a one of the best drug for Amoebic Dysentery or Diarrhoea. The tree is also useful in Rheumatic Arthritis & Osteoarthritis. Indrajao also possesses potent immuno-stimulant property. Its scented white flowers improve appetite and its seeds act as a cooling agent. The tree is propagates with seeds. The seeds should be soaked in cold water for 24 hours and then sown. This will increase the germination rate.

In Sanskrit, 'Kuta' means mountain. The tree which grows in mountain region is Kutaja. Thus, it can grow in tough conditions and grows moderately fast. It tolerates variety of soils, and can grow even in degraded land. It is believed to improve the soil where it grows. Shade retards its growth but it can tolerate full sun. As an effective screen or as a taller hedge, this species can be planted in a continuous row. It does well in tough sites even with little watering and it requires almost no maintenance. Indrajao with its short stem, many branches and little broad crown converts the corner of a residential area into a pictorial patch. Its bright white mildly fragrant flowers add grace to the garden. The tree performs well in the urban environment.
Posted by Paresh Prashant Phalak No comments: