Do you believe that there should be co-existence of life? Do you have that compassion for all of the living things? Do you believe that all living beings, including animals & trees, have right to survive and share all resources?
Sounds like a ‘once upon a time’ story? Or appears to be like the Na’vi people from the movie Avatar?? But these people exist in Western Rajasthan, . :-)
They have been conserving the flora and fauna for centuries to the extent of sacrificing their lives to protect the environment. For these Nature-loving people, protection of the environment, wildlife and plants is a part and inherited parcel of their sacred traditions. Their religion of peace based on 29 principles that included compassion for all living beings, cleanliness, devotion, vegetarian diet and truthfulness. They are the Bishnois (bish means twenty, noi is nine).
A small community spread over the North-Western states of , including , Haryana, Madhya Pradesh, Uttar Pradesh besides Rajasthan, the Bishnois have contributed more to environment and wildlife protection than any other community. They have learnt, with time and hardships, how to nurture Nature and grow with her instead of exploiting it.
More than 500 years ago, a simple visionary villager saint from a remote desert area, without even the basic education, clearly understood the importance of preserving bio-diversity and the ill-effects of not doing so. He not only understood it himself, but also had the wisdom to influence generations of people to preserve it by weaving it with their religion.
With firm roots in Hinduism, Bishnoi is not just a community, but a simple & scientific way of living. A person who follows 29 rules laid by Guru Jambheshwarji is a Bishnoi. Bishnoism teaches love & harmony among human, tree, animals & whole Nature. Bishnoi people have their self sustained economy by farming and animal husbandry. Most of normal life essentials are their own produced like food grains, milk, butter, cooking oil, masalas, cotton, wool. Out of total 29 principles of Bishnoism, 6 principles are dedicated to environment protection & compassion for living things.
Here are some interesting facts about them -
Though worshipping the Hindu Deity Vishnu, the Bishnois bury their dead. The idea is to avoid wastage of fire wood used in cremations.
They use dead wood & fuel cakes made of cow dung waste fodder for cooking purposes to minimize the use of green trees.
Bishnoi carpenters never cut a live trees. They wait for trees to die on their own or fall down during storms.
Every Bishnoi family creates a tank in their field to provide water for animals in the arid summer months. They themselves can be hungry & thirsty but they will never allow an animal or bird to die due to lack of fodder/food or water.
Even though much of their standing crop is eaten by deer herds, no Bishnoi ever chases a deer away.
Bishnois consider it a great pride to be able to die saving trees or animals.
In Abohar tehsil of , there is a sanctuary notified by Punjab Government containing 13 Bishnoi villages. This is a unique sanctuary comprising of farmers lands!
Though propounders of peace and non-violence, Bishnois can become extremely violent if any animal or tree is harmed in their area.
Today also, the Bishnois immediately detect hunters who come to their villages and catch them. If the poachers escape leaving a dead antelope in an agricultural field, the owner will mourn its death like that of the passing on of a near or dear one and will not eat or drink water till the last rites are performed. On many occasions the Bishnois are injured and even killed by hunters but they fearlessly provide strict protection to the blackbuck and chinkara, which fearlessly roam in their settlements. Having this kind of environmental awareness and commitment, Bishnois stand apart from the countless other sects and communities in .
The story of Amrita Devi still echoes in the community. 300 years back, when officials of the king of , Maharaja Abhay Singh started felling a few Khejri trees in Khejerli village, Amrita Devi with her three daughters offered their heads to prevent the felling. "If a tree can be saved at the cost of my head, then this is a good deal & acceptable to me” said Amrita Devi. Till the tree felling stopped, 363 Bishnois from Khejerli and adjoining villages sacrificed their lives. Later, hearing about it, the King apologized for his action and issued a royal decree engraved on a copper plate, prohibiting the cutting of trees and hunting of animals in all Bishnoi villages. Violation of this order by anyone including the members of the ruling family would entail prosecution and a severe penalty. A temple and monument stand as testimony to the sacrifice of the 363 martyrs. Every year, the Bishnois assemble there to commemorate the extreme sacrifice made by their people to preserve their faith and religion.
Bishnois supreme sacrifice inspired many including Sundarlal Bahuguna who launched the Chipko Aandolan or Tree Clinging Movement.
"Embrace the trees and
Save them from being felled;
The property of our hills,
Save them from being looted."
..Mr Ghanasyam Raturi, the Chipko Poet, whose songs echo throughout the Himalayas of Uttar Pradesh.
The people have made a unique blend of ecological sense and religious sensibility their faith's cornerstone. Any change in the world has to begin within the society. Think for a moment... All this talk about Nature and wildlife protection would be more effective if each individual was to believe in the Earth as a living, breathing entity and fight for its survival the way they do.
Bishnoi principles are ray of hope for health, environment, peace, harmony & love and are useful for everyone irrespective religion, faith & community.
"Maatu hamru, paani hamru,
hamra hi chhan yi baun bhi...
Pitron na lagai baun,
hamunahi ta bachon bhi"
Meaning of this old Chipko Song : Soil ours, water ours, ours are these forests.
Our forefathers raised them, it’s We who must protect them!
Posted by Paresh Prashant Phalak 5 comments:

Its more than a year now that I am making You familiar to our Native Trees...and I will continue to do so! Till now, I may have mentioned N number of uses or advantages or benefits of Trees. But have you ever thought, Trees also make us look beautiful! No I am not talking about various cosmetics made from Trees. Just think.. When You pose for a photograph, do you prefer a 'non-green site' (concrete buildings, tar-road or a wall) behind yourself?
Imagine You standing in front of a under-construction building with a photographer shouting "Say cheese".
'Phew' will be your reaction!

Now imagine You standing on the bank of a tranquilizing river coming down from the shoulders of a mountain covered with Trees...
'Wow!' The imagination itself is so blissful!!

Few exceptions apart, most of the time You will choose a 'green site' (forests, river, mountains) for photo-shoots, isn't it? Not just for photographs, but Trees are so important! The soil of mountains, rivers, climate regulation and so on..all are Gifts by Trees! Trees give us that all! Our Native Trees!!!

We usually, tend to smile when somebody say 'cheese' at the time of photo-shoot. But we forget about our Native Trees which make us smile..! 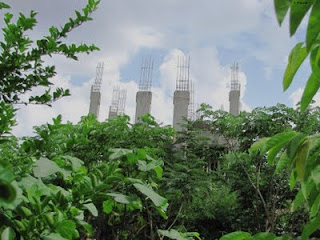 The ever-increasing size of cities engulfing the forests and agricultural lands that once were Green. Ultimately, its We all that cutting down forests and constructing concrete buildings. The cities are increasing in size & population, demanding more & more space. And no one of the urban-dweller is exception to it. But one can make exceptions here..one can make a difference! By planting and nurturing few of these at your place.

So that next time when somebody poses in front of these beautiful trees planted by You, your face will have a broad sssssmmmile!!!
Smile Green! :-) 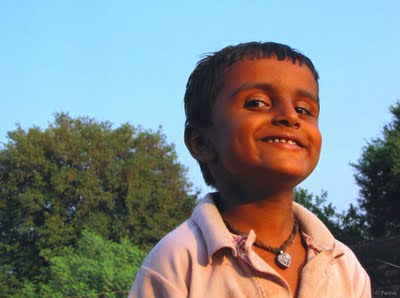 So next time when You pose in front of a camera, say "TREES!" instead! :-B)
Posted by Paresh Prashant Phalak 5 comments: