Peepal is one of the best known trees of . It is a large, fast growing deciduous tree which has got mythological, religious and medicinal importance in Indian culture since times immemorial!

The Sacred Fig (Ficus Religiosa/पिंपळ, अश्वत्थ) is regarded as the representation of various Hindu Gods as well as Goddesses. It has a heart shaped leaves & large crown with the wonderful wide spreading branches. It can grow in any type of soil. It’s a native tree which gives shelter to lots of birds, insects & reptiles too. May be due to its importance in ecosystem, its also known as Vanaspati (Lord of Forest). 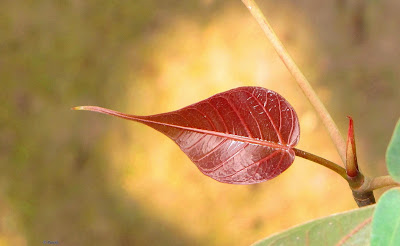 The Peepal tree is held sacred both by the Hindus and Buddhist. Peepal has the great importance in especially among the Buddhist who regard Peepal tree as the personification of Buddha. According to the Buddha 'He who worships the Peepal will receive the same reward as if he worshiped me in person'. Because Lord Buddha is believed to have attained enlightenment under this tree, it is often referred to as the Bodhi tree or the ‘Tree of Enlightenment’. Thus Peepal tree has its own symbolic meaning of Enlightenment and Peace. Hindus in holds the great spiritual regard for the Peepal, they regard it as the tree beneath which Lord Vishnu was born. Peepal tree is considered highly sacred, as people are of the belief that our trinity.. Brahma, Vishnu and Mahesh & many other Gods used to reside underneath the tree. The tree is also believed to be associated with the Mother Goddess during the period of civilization. People revere the Peepal tree and also perform a pooja in its dedication.

It is considered to be the most auspicious tree in Hindu mythology which says,“Peepal tree is the abode of Gods and Goddesses” & hence the tree should never be harmed. The tree is also closely linked to Lord

The tree also symbolises the continuity of life because the tree itself lives & grows for hundreds of years. Probably that's why this is the only tree which is honoured as the state tree of three Indian states.. Bihar, Haryana & Orissa. Peepal is one of the longest living trees. The Shri MahaBodhi tree, located in Bodh Gaya in the Indian state of , has a known planting date of 288 B.C. This is the oldest, verified age of any angiosperm or flowering plant! 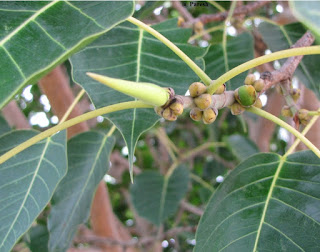 This Tree of Life has also been recognized for the medicinal value in Ayurveda as well as Unani. Each and every part of the tree is used in treating one or the other ailments!

The leaves are a good fodder for elephants and cattle. The leaves are dried they are used for the decoration purpose. From the bark of the Peepal tree reddish dye is extracted. Its bark yields the tannin used in treating leather. The bark yields a tenacious milky juice which hardens into a substance resembling rubber. Its bark yields a fibre as well. The latex is used as a sealing wax to fill cavities.

It is a well known fact that plants utilise carbon dioxide for photo-synthesis & release oxygen during day time. But Peepal can also do a modified form of photosynthesis called as Crassulacean Acid Metabolism. Though they may not release large amount of oxygen by this process but they are capable of doing photosynthesis during night. Besides this research work conducted on several plants revealed that the Peepal releases large quantities of Isoprene a volatile organic compound necessary for preventing depletion of ozone layer concluding that these trees play an important role in preserving ozone layer.

Being such a wonderful & useful tree, it is obvious that our mythology do not allow to hurt the tree in anyway. To cut down a Peepal is considered a sin equivalent to killing a Brahmin, one of the five deadly sins (Pancha-pataka). According to the Skanda Purana, a person goes to hell for doing so!

Truly Peepal is one of the Nature’s valuable gifts. The highly beneficial tree is easily propagated through the seeds. It benefits not only humans but birds & insects too in multiple ways. Hope this heart-leaved sacred tree resides in your heart and you have the heart to plant one!
Posted by Paresh Prashant Phalak