Asoka or Ashoka is a Sanskrit word which means 'without sorrow', or which that gives no-grief. The Sorrowless tree, Sita Ashoka, or simply, Ashoka (Saraca Asoca/सीता अशोक) is one of the most legendary and a sacred tree of . The plant is prized for its beautiful foliage and flowers. Some of the local language describes it as tree of Love bosoms. The Hindu mythology describes it to be a sacred one and dedicated to Kamadeva, the God of Love. It is also said that Buddha was born under this tree, hence this tree is planted in all Buddhist monastery. 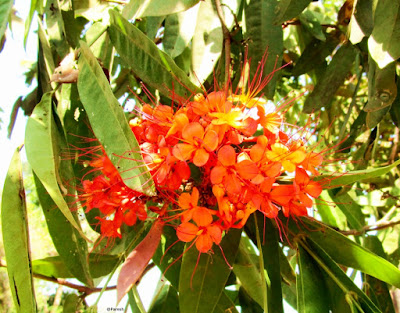 It is a very handsome, small & erect, ever-green tree, with deep green leaves growing in dense clusters. Flowers are usually to be seen throughout the year, but it is in winter that the profusion of orange & scarlet clusters turns the tree into an object of startling beauty. Sita Ashoka, a herald of spring, produces large bunches of glorious flowers of outstanding beauty, bright orange-yellow in color, turning red before wilting. It is easy-to-grow, easy-to-prune tree that flowers abundantly and produces a compact shaped canopy - an ideal candidate as a houseplant or a lawn tree in urban areas. It attracts loads of bees, butterflies and birds. 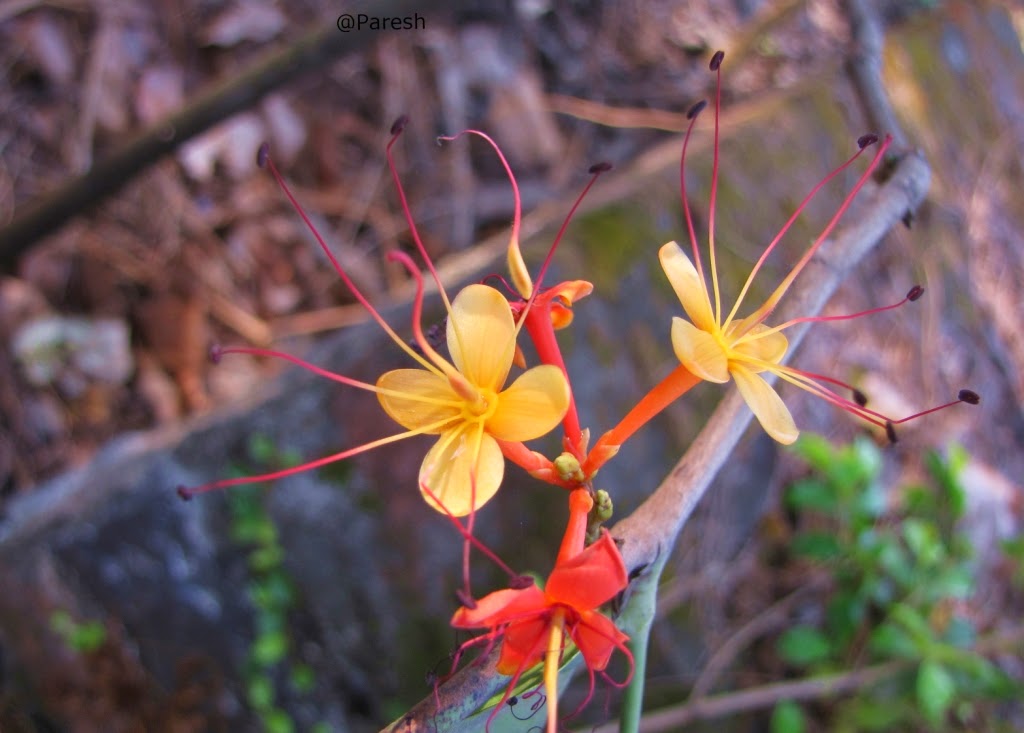 Hindus revere it because to them it is the symbol of love as Kamadeva included an Sita Ashoka blossom among the five flowers in his quiver. Sita, wife of Lord Rama, when abducted by the evil Ravana, she was kept in a garden among groves of Sita Ashoka trees, Ashok-Vatika. Both Buddhists and Hindus plant the tree round their temples and the blossoms are among those used for religious offerings. And possibly due to this, numerous legends and uses are attributed to this beautiful tree. The tree often marks the site of temples and rock carvings. On Ashok Shasthi day, women from eat the flower buds, while Hindu ladies believe that by drinking the water in which flowers have lain, they will protect their children from worry and grief. The tree is known to reduce the pain & sorrow of people. People feel happy when they see the extra-ordinary beauty of the tree. 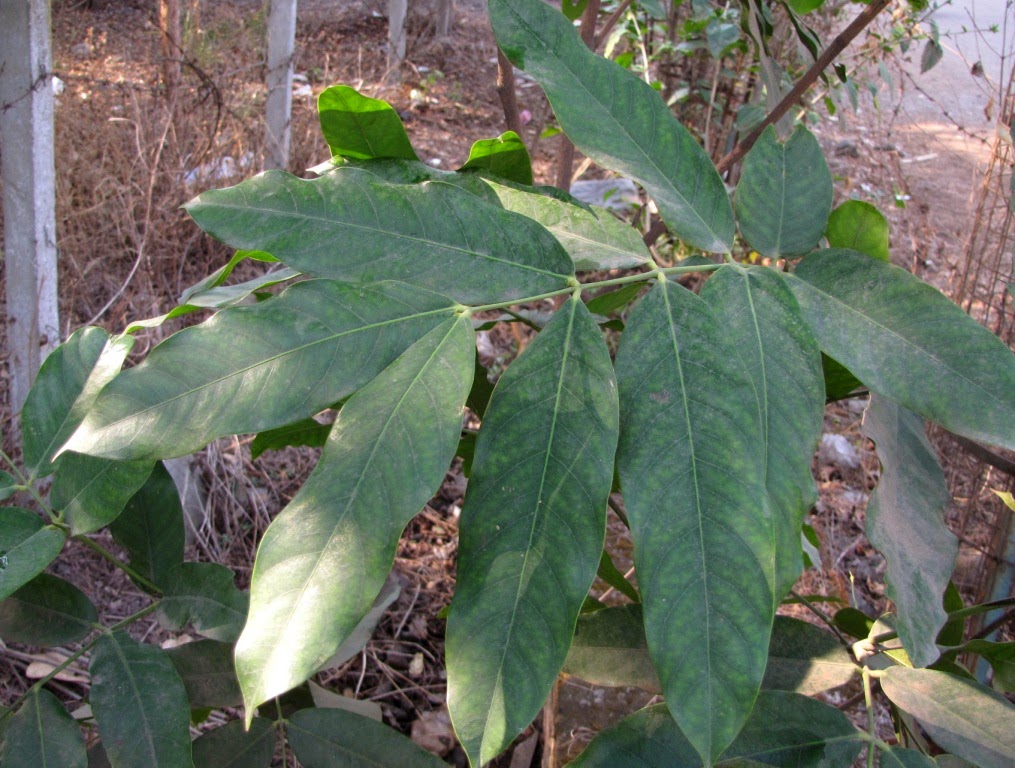 According to Ayurvedic medicine, it is the one herb that stands out as especially useful for treating excessive uterine bleeding. The earliest chronicled mention is in the Ayurvedic treatise, the Charaka Samhita (100 A.D.), in which Sita Ashoka is recommended in formulations for the management Pain with relation to Uterus as Anodynes. The Bhavprakasha Nighantu, commonly known as the 'Indian Materia Medica' (1500 A.D.), cites the plant as a Uterine tonic that is effective in regularizing the menstrual disorders. Sita Ashoka is an excellent herb for gynecological problems. It is useful in stimulating the uterus, the endometrium and the ovarian tissues, uterine bleeding associated with fibroids, leucorrhoea, menstrual disturbances without producing any side effects. Apart from this it is also useful for other ailments such as internal piles, diabetes, dyspepsia, indigestion, burning sensation, blood disorders, fractures, tumors, bites, inflammations, ulcerations and skin discoloration.

Sita Ashoka is an important tree in the cultural traditions of . There is no doubt that why this useful tree is honoured as a state tree of Uttar Pradesh as well as state flower of Orrisa. 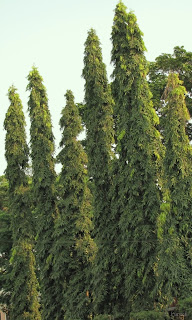 But the tree which is always misunderstood for the Ashoka tree is in fact the Mast tree or False Ashoka (Polyalthia Longifolia/अशोक). Its because of closely resembling leaves of both the species.

Mast tree is a lofty evergreen tree, native to , commonly planted due to its effectiveness in alleviating noise pollution. The tree can be trimmed as required and has very beautiful flowers. Fruit are borne in clusters of 10-20, initially green but turning purple or black when ripe. These are loved by birds. The tree can be propagated by seeds or cuttings. 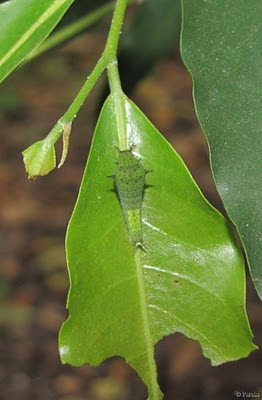 It is a drought-tolerant medicinal tree. In Ayurvedic medicine, it is known to pacify vitiated vata, pitta, inflammation, fever, skin disease, diabetes, hypertension and worm infestation. Besides, its a sacred tree in and , where the tree is held in high esteem, its leaves are used in religious ceremonies and for decorating arches and doorways. Its leaves also serves as larval food for butterflies like Swallowtails. The adjacent photograph is showing the caterpillar of Tailed Jay butterfly feeding on leaves of Mast tree.

Mast tree is one of the prime choices of landscape designers. It is well-suited for urban societies as visual dividers, wind blockers in open spaces or as a hedge tree.
Posted by Paresh Prashant Phalak