The Pride of India

Here is one of the most spectacular flowering trees in the world. The Queen's Crape Myrtle or simply, Jarul (Lagerstroemia Speciosa/जारुळ, तामण) is one of the most outstanding summer bloomers. It is a fast growing, almost evergreen, moderate-sized species which has many uses to its name. 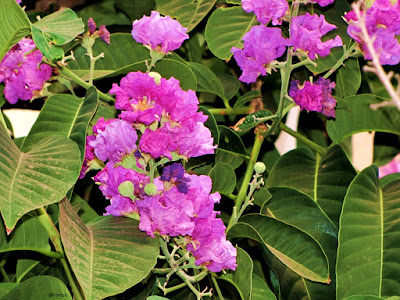 A profusion of large, dark pink to lavender blooms appear in dense, foot-long, terminal panicles, making Jarul tree a spectacular specimen to look at. Putting out brilliant displays of the glorious bright flowers, the tree attracts large numbers of bees, butterflies and birds. Furthermore, a well grown tree may flower twice a year. Due to which, it will stand out in every garden and is a beautiful landscape tree. The Jarul tree can start flowering as early as three years of age.

Jarul is a drought tolerant species which is easily cared in the garden or landscape with really a low maintenance. It will grow in full sun on a wide range of well-drained soils but is not salt-tolerant. It coppices freely and is easily propagated by seeds, cuttings, root suckers.

Jarul has dense and wide spreading root system. Hence the tree is valued for erosion control. The hardy tree can even be utilised for reforestation of degraded hills.

Being one of the most beautiful trees, moreover, this tree is also medicinally valuable & famous in Ayurvedic medicine. Jarul can be used to treat number of ailments such as urinary tract infections, blood pressure & even type II diabetes mellitus. It is also believed to have anti-diabetic & weight reducing properties. Technically, the active principle is considered to be corosolic acid, which promotes glucose transport or utilization in the body cells. The current thinking is that Jarul can lower glucose independent of pancreatic insulin. This makes the active principle of the tree a natural form of insulin from plants. A tea, made from the leaves, served as a health drink. There are no known side effects or toxic reactions of Jarul. In fact, it has been reported that it can help detoxify the body and protect the liver.

This species is also known by the name 'Pride of India' and it certainly merits this name attributed to it. It one of the well-known ornamental trees and is widely cultivated in home-gardens & as an avenue tree. It is perfect tree for urban societies. In full bloom, the pale greens and variegated clusters of beautiful flowers stand out as a relief against the dense darkness of the cement jungle. 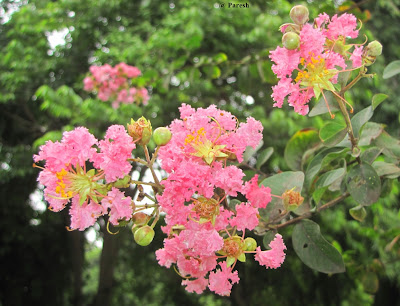 Another similar species from the same genus is Crape Myrtle or Common Crape (Lagerstroemia Indica/सावनी). This deciduous tree is among the longest blooming trees with flowering periods of almost 4 months. Its attractive foliage and good frost & drought-tolerance; all combine to make Crape Myrtle a favorite small tree for any landscape. It is highly recommended for planting in urban and suburban areas. 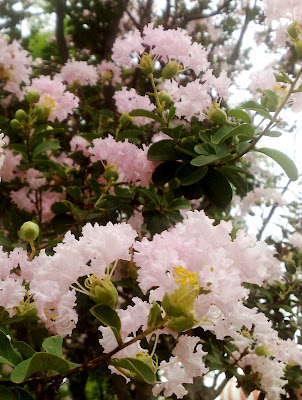 The flowers are borne in summer in big showy clusters which will catch one’s eyes even from a distance. Another fascinating fact is the flowers come in many shades of pink, white, crimson, lavender and red with crimped petals.

Crape Myrtle grows best in full sun in almost any kind of soil sand, loam or clay.
It will tolerate less hospitable positions in the landscape just as well. It grows well in limited soil spaces in urban areas such as along roads, in parking lots, and in small pavement cutouts if provided with some irrigation until well established.