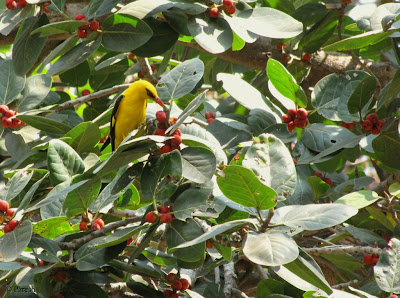 It is the most popular and remarkable tree of . If asked anybody few names of trees, he/she is sure to name Banyan tree first! Banyan (Ficus Benghalensis/वड, वट) is a large fascinating tree which produces propagating roots which grow downwards as aerial roots. Once these roots reach the ground, they grow into woody trunks that can become indistinguishable from the main trunk. Since ages, Banyan tree is worshiped in . Rig Veda and Atharva Veda stipulate the importance of the tree for their inevitable role in human life. It is considered one among the most sacred trees. In the Hindu mythology, Lord Shiva is sometimes depicted sitting in silence, under the banyan tree, with the saints sitting at His feet. With its seemingly unending expansion, the Banyan tree symbolizes eternal life. This tree often shelters a little or larger temple underneath, but is offered worship on its own generally too. Married Hindu women worship the Banyan tree to lead a long and happy married life on the festival of Vata Savitri Purnima. Even apart from the worship, it is one of the most sheltering trees in the hot summer, with a large and deep shade. Many farmers have a large Banyan in their fields planted by their ancestors, and is worshiped before they plough the fields.

With high medicinal value, Banyan is often used as a herb to treat and cure number of diseases. The juice of the Banyan yields an inferior rubber. From the bark and young hanging roots a coarse fibre is obtained which is used for rope-making. 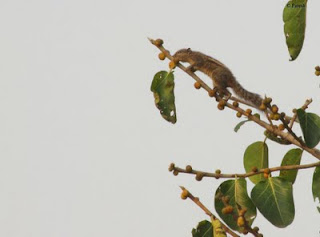 The tree may be propagated from seeds. The seeds should be sown as soon as they ripen. Naturally, the fruits are eaten by birds and mammals. Hence you will always find the tree loaded with variety of birds and mammals like squirrels, bats etc. The seeds are dispersed by birds and studies have shown that seeds that pass through the digestive system of the bird are more likely to germinate as well as sprout earlier. It often starts life in the same way as the Peepal, as an epiphyte.

It is a very beautiful tree, especially when the bright orange-red colored fruits appear. As the canopy gives nice shade, its shade was a usual meeting place for baniyas, Indian merchants in ancient times. Thus the tree got its name, Banyan. Traditionally it was found almost ubiquitously on roads and in village centres, the latter very useful for any formal or informal gathering to be conducted in a cool place or even for any poor person or a travelers to sleep under. The respect for this and other trees of this nature is thus linked both to the use and the worship as sacred. Banyan is also the National tree of .

Another similar species of Ficus, the Cluster Fig (Ficus Racemosa/उंबर, औदुंबर, गुलर) is also a sacred, fast-growing tree, favourite of Lord Dattatreya. According to Vedas, the tree is given prominence as a means for acquiring prosperity and vanquishing foes. Unlike the Banyan, it has no aerial roots. 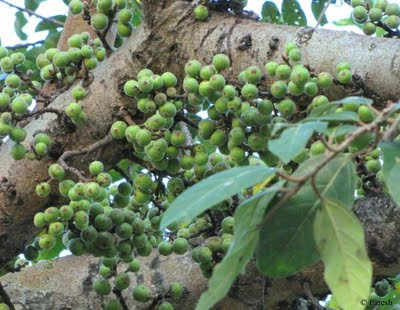 The most distinctive aspect of this tree is the red, edible fruits in short clusters, which grow directly out of the trunk of the tree. Those looking for the flower of the tree should know that the fruit is actually a compartment carrying hundreds of flowers. One might wonder how these flowers enclosed in a ball are pollinated. The flowers are pollinated by very small wasps that crawl through the opening in search of a suitable place to lay eggs. Without this pollinator service, the tree can not reproduce by seed. The seeds usually are dispersed by birds and animals.

In Ayurveda, Cluster Fig is supposed to cure more than 50 diseases. Like Banyan, it also is loaded with birds and mammals. The leaves are used as fodder.

Both of these trees were abundant in a decade ago, ideal for road-side plantations. But nowadays, these sacred trees are being cut in the name of Urban Development and Road Widening. They are not even preferred near houses & societies as WE do not want the 'garbage' (fallen fruits & leaves) they create in good amount. But the fact is, their discard actually fertilizes and impregnates the soil, returning all the essential nutrients to it. Furthermore, they harbor great amount of wildlife, making it a must plantation species!
Posted by Paresh Prashant Phalak