Its name White Teak may reveal the importance this tree or other name, the Kashmir tree may give you the idea about its beauty. Popularly known, in India, as Gamhar or Shivan (Gmelina Arborea/शिवण) is very beautiful & useful species occurring naturally throughout greater part of India. Its a moderately sized deciduous tree with a straight trunk. It is wide spreading with numerous branches forming a large shady crown. 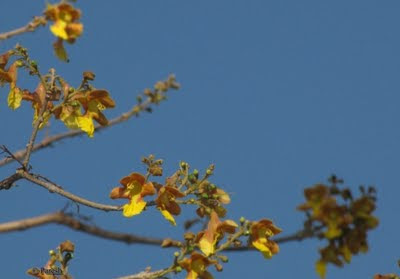 Gamhar is fast growing tree with simple, more less heart-shaped leaves. The flowers are large, showy, abundant, scented, varying from yellow to orange or brilliant orange to reddish or brownish-yellow. Many types of insects are attracted to the flower showing that the flowers may be insect-pollinated. Birds and bats, attracted by the smell of fruits, are the main seed dispersal agents.


It has suitable characteristics for agroforestry, with fast growth and ease of establishment. It is an especially promising fuelwood species because it can be established easily, regenerates well from both sprouts and seeds. The tree coppices well with vigorous shoot growth.  Leaves are regarded as good fodder for cattle and are also used as a feed to eri-silkworm. It can be browsed repeatedly without damage. It gives good quality charcoal. Flowers produce abundant nectar, which produces high-quality honey. Although able to compete with weeds more successfully than many other species, it responds positively to weeding and also benefits from irrigation. 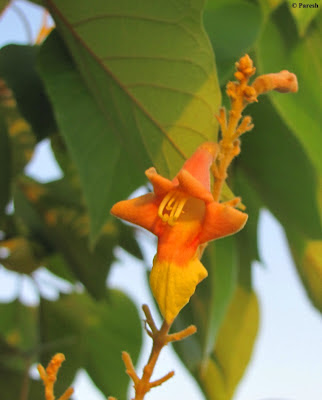 In our ancient Ayurvedic medicine also, its bark, leaves, fruits, flowers and roots, all are used medicinally, against number of ailments from headache to leprosy. It may also recommended in combination with other drugs for the treatment of snakebite and scorpion sting. Other uses include a very persistent yellow dye yielded from the tree and fruit.
Gamhar is a highly light-demanding species and regenerates naturally only in the open and on the edge of forests. It is an ideal choice for large-scale afforestation and reclamation programmes. It provide abundant mulch in the form of leaf litter. It is also valuable in coffee and cocoa plantations to protect young trees and to suppress invasive weed due dense canopy. In some areas of India, the fruit is edible. It is moderately frost hardy. It has the capacity to recover from frost injury. The tree is termite and fire resistant. It is often planted as an ornamental, shade tree.
The tree can be propagated by seeds, cuttings, and stumps. For quick germination, the seeds should be soaked for 24 hours. It is commonly planted as a garden and an avenue tree; growing in villages along agricultural land, on village community lands and wastelands. This useful species is also a state tree of Meghalaya.
Posted by Paresh Prashant Phalak