The Favourite Tree Of God

Common Bur Flower or Kadam (Neolamarckia Cadamba/कदंब) is a large, evergreen tree with beautiful & unique flowers. It is a fast growing tree with a broad crown and is even planted sacredly near temples.

The flower of the tree is red to orange in colour, occurring in dense, globe-like head. It nicely assumes the shape of a ball. When the tree is in bloom, one can see the tree loaded with numerous beautiful flowers. The flowering usually begins when the tree is 4–5 years old. 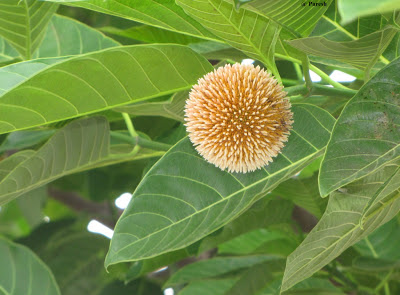 In Hindu mythology, the Kadam tree is the favourite tree of the Lord , who is usually depicted playing his flute under it. He also used to play with his friends under the Kadam tree in Vrindavan using the unique globular flower of the tree. Hence the tree is also known as Haripriya, God's favourite. Also the Mother Goddess Durga resides in a Kadam forest (Kadamba Vana Vāsinī). But this seems to be a mistaken identity, as the Kaim tree (Mitragyna Parvifolia/कैम, कळंब, कळम) which is a native and dominant species in hot & dry environment of that region, is also known as Kadam in Vrindavan. Besides the Common Bur Flower tree is highly regarded religiously and culturally in , Java and . Kadam trees and flowers are also a universal favourite among the Gods. 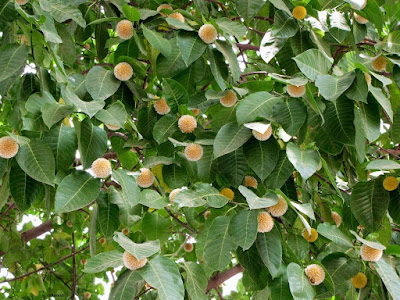 Kadam tree is suitable for reforestation programs. It can even bee used in Agroforestry practices. The fresh leaves can act as fodder for cattle. The ornamental tree is also used for soil reclamation. It sheds large amounts of leaf and non-leaf litter which on decomposition improves some physical & chemical properties of soil under its canopy. This reflects an increase in the level of soil organic carbon, cation exchange capacity, available plant nutrients and exchangeable bases. The fragrant orange flowers attract pollinators like bees, butterflies & birds. Furthermore, this tree can grow best in alluvial sites like river-banks and in the transitional zone between swampy, permanently flooded and periodically flooded areas.


This beautiful tree is also known for its medicinal virtues. The tree has astringent & antipyretic properties. It is believed to have cure for ulcers, digestive ailments, diarrhoea, expectorant, fever, vomiting etc.

A yellow dye is obtained from the root bark. Kadam flowers are an important raw material in the production of attar, Indian perfume with Sandalwood (Santalum Album) base in which one of the essences is absorbed through hydro-distillation. The tree is grown along avenues, roadsides and villages for shade. The fresh leaves are sometimes used as serviettes or plates. 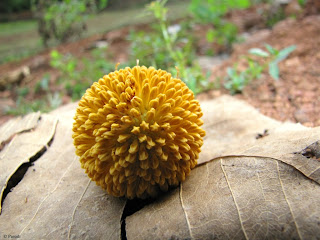 It is common belief among the natives of many villages in the state Chhattisgarh that plantation of Kadam tree near to lakes and ponds, brings happiness and prosperity in their life. Well, the presence of this tree may bless them or it may not. But it's absence will not be better than a curse, for sure..!
Posted by Paresh Prashant Phalak