Love can do miracles..!

Last year, my cute little niece Poorvi planted a Banyan tree sapling on the eve of Vat Pournima in a public garden. Though a small incident, it was published in a leading local news paper, as to inspire all of us to make effort for green future of the next generation. 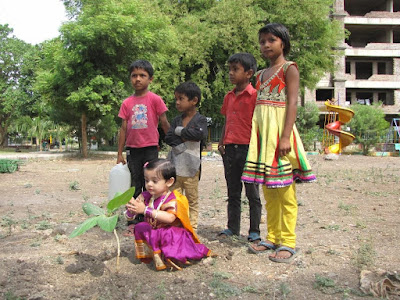 I still remember the day. There were few children playing in that garden accompanied by their parents. Watching a little girl planting a sapling, they all gathered around her and there started a conversation. Couple of them were just standing out of curiosity. Few started discussing about the decreased tree cover of Nashik. Apparently, out of them, one fine lady had no liking for Banyan and she was apprehensive about the spreading roots of Banyan which could disturb the foundation of adjacent buildings. Quite the contrary, the younger generation was in favor of Banyan tree as thy couldn't easily spot one in that garden with majority of introduced 'alien' trees.

I had to explain the lady that the residential buildings are at least 40 meters away from this very plantation site, and in fact she need not to worry as it may take minimum 2 or 3 centuries to grow this Banyan that big. I also urged her that we should gift & preserve such trees for our next generation so that they also understand the importance of Native species. 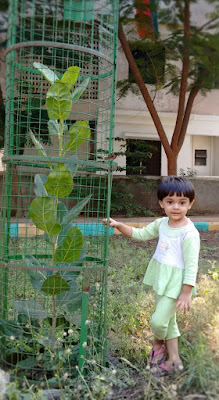 The young brigade not only offered a helping hand, but few of them also committed to water the sapling regularly. Their faces were radiant enough with the joy of planting a tree. It was a signal to all the adults that instead of doing just the talking, we actually did it! Meanwhile, my father, Dr Prashant Phalak used to look after it periodically. I, personally, visited the spot four months back. That time, the sapling was very much good in condition.

Last week, I happened to be there with my niece. And trust me, I was astonished to see that the Banyan has grown beyond 5 feet in less than a year! My niece was also delighted to see it growing so fast.

Love & care from young ones was more powerful than apprehension and fear of adults. It was that love which must have nurtured the sapling, I guess! Indeed, love can do miracles!

Today is 6th anniversary of 'Gifting Trees...' During last year, We have planted 12 saplings. And I promise you all, we will soon cross 300...may be on this Environment Day itself. Let there be love for Native trees everywhere...always!!!
Posted by Paresh Prashant Phalak