The Trees for Taste

Here is a tasty treat for you that you will surely enjoy! :)
Although it may not be what you would choose for an afternoon snack, we consider Lemons (Citrus Limon/लिंबू) as powerhouses when we want to bring out the flavor of other foods. Lemon tree is becoming more and more popular as landscaping plant, offering not only fruit but an attractive form of year-round, glossy, deep green foliage and fragrant flowers that would rival any! 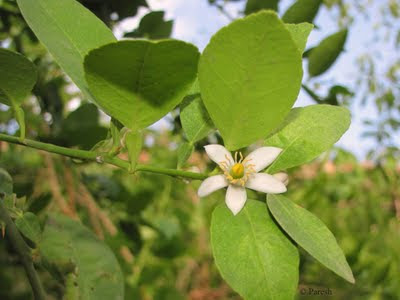 Lemons are oval in shape and feature a greenish-yellow, textured outer peel. Like other citrus fruits, their inner flesh is encased in 8 to 10 segments. While most of them are tart, acidic & astringent, they are also surprisingly refreshing. Slices of Lemon are served as a garnish on food or with iced or hot tea, to be squeezed for the flavorful juice.
The fruit is very nutritional. It contains vitamin A, B complex, C and E with number of minerals like Potassium, Phosphorus, Magnesium, Calcium, Sodium, Iron, Selenium, Manganese, Copper, Zinc etc in good quantity. Probably that is why it is used tremendously in cooking. A drink made from Lemon juice a cool, refreshing one. Lemon juice, fresh, canned, concentrated & frozen or dehydrated & powdered, is primarily used for lemonade, in carbonated beverages or other drinks. It is also used for making pies and tarts, as a flavoring for cakes, cookies, cake icings, puddings, sherbet, confectionery and preservatives. But beyond cooking, in the world of traditional medicine, the lemon is widely known for its healing powers and is used in many different ways. Lemon juice is valued in the home as a stain remover, and a slice of lemon dipped in salt can be used to clean copper-bottomed cooking pots. Lemon juice has been used for bleaching freckles and is incorporated into some facial cleansing creams. Lemon peel is the source of lemon oil, pectin and citric acid. Lemon oil is added to frozen or otherwise processed lemon juice to enrich the flavor. It is much employed as a flavoring for hard candies. It is also much used in furniture polishes, detergents, soaps & shampoos. It is important in perfume blending, especially in colognes.
Not only the fruit juice but oil expressed from lemon seeds is also employed medicinally. Lemon juice is widely known as a diuretic, anti-scorbutic, astringent and febrifuge. Lemon juice in hot water has been widely advocated as a daily laxative & preventive of the common cold. Lemon juice and honey, or lemon juice with salt or ginger, is taken when needed as a cold remedy.
The lemon tree is a very hardy tree. It doesn't require much care and grows moderately fast. It has the reputation of tolerating very infertile, very poor soil. It is easily propagated from seeds.
The Lemon tree is a suitable species for urban home gardens. But it can also be a good agroforestry tree. The fruit peel & foliage can be used a s a cattle-feed. The aromatic flowers may serve as bee-forage. The tree also controls soil erosion with the help of dense network of roots. Furthermore, it gives green manure which is useful in farming. It is a ideal species for fencing or as a windbreak.
The another species to add taste to your food is the Kokum tree (Garcinia Indica/कोकम, आमसूल, रातंबा, भेरंड) which is a graceful, tall evergreen tree. It is indigenous to the Western Ghats region of , along the western coast which is gifted with rich soil, adequate rainfall and very good sunshine. 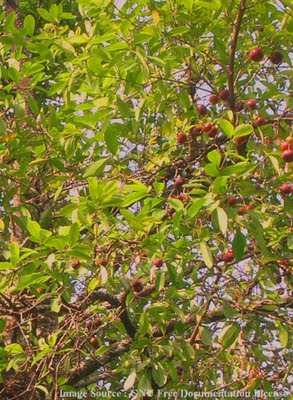 Kokum tree has dark green foliage & a pyramidal shape. The tree blooms in winter and the fruits ripen in summer. The Kokum fruit or Ratamba looks similar to small variety plum and has dark purple color when ripe. Fruits are harvested when ripe and only the rind is preserved by drying in the Sun. That is Kokum or Aamsul. Sometimes salt is rubbed onto the rind to speed up the drying process. It is used as a slightly sour spice in recipes from that yields peculiar taste and dark red colour. It is preferred in curries and other dishes from Konkan. It is widely used in Konkani cuisine, in Gujarat and some cuisines of .
Kokum is mainly used as a souring agent. It has a fruity & distinctive tangy flavor. It is commonly utilized as a garnish in Indian cuisine and is an essential ingredient to a tasty local curry, Sol Kadhi. It is a popular drink used during hot summer months to quench thirst and to provide gastric relief.
The fruit tree has culinary, pharmaceutical and industrial uses. The tree is also ornamental, with a dense canopy of green leaves and red-tinged, tender, emerging leaves. It is found in forest lands, riversides & wasteland and also gets cultivated on a small scale. It is rainfed, does not have any pest or diseases & is almost a 'zero-attention' species. It does not require irrigation, spraying or fertilizers. Those researching on the tree see it as having a bright future. It is propagated from seeds.
Kokum has a long history in Ayurvedic medicine as it was traditionally used to treat sores, dermatitis, ear infection and to relieve gastric problems like acidity, flatulence, constipation & indigestion. The tree pacifies vitiated vata, kapha, obesity, hypercholestremia, diarrhea, colic, ulcers, inflammations and hyper-perspiration. Kokum is known to strengthen the cardio-vascular system and stabilize liver function. The hydroxycitric acid present in the fruit fights cholesterol and curbs lipogenesis, thus aiding weight loss.
Kokum fruits contain rich amounts of anti-oxidants that bind with free radicals and prevent oxidative damage to body cells. They also promote cell regeneration and repair. Kokum juice is also thought to be effective against allergies due to bee stings and other insect bites, sun exposure symptoms and acidity. It is mixed with yogurt and salt to make a natural antacid, the perfect addition to spicy Indian feasts.
Kokum seed contains 23-26% oil, which remains solid at room temperature and freezes to form Kokum butter. It is extensively used in the preparations of confectionery, pharmaceutical and cosmetic industry as it works wonders on dry, chapped, sensitive, irritated or burnt skin. Kokum butter is rapidly gaining popularity over Cocoa butter as an intensive skin moisturizer. Due to its soothing and healing properties, it is also applied directly to wounds and infected areas on the skin. It is rich in healthy fats like stearic and oleic acids and can also be used as edible oil.
Kokum sherbet/juice is a healthier and far more refreshing option as compared to commercial bottled drinks. It acts as an appetite stimulant and has anti-helmintic properties. It also helps in bringing down fever and allergic reactions. Kokum juice is extremely popular during scorching summer months as it has a cooling effect on the body and shields the body against dehydration and sunstroke.
Kokum can be an excellent agroforestry species. It grows moderately fast & provide good quantity of green manure. It usually can be seen as shade or wind-break species.
Finally here is a tree which is actually not native to India. It originated in tropical Africa, including Sudan. Its the Tamarind tree (Tamarindus Indica/चिंच). Surprisd?? But that's right! The tree was so long ago introduced into and adopted in India that it has often been reported as indigenous here; and it was apparently from this Asiatic country that it reached the Persians and the Arabs who called it tamar e hind (Indian date, from the date-like appearance of the dried pulp), giving rise to both its common and generic names. Marco Polo mentions the tree in the year 1298. In the Indian Brahmasamhita scriptures, the tree is mentioned between 1200 and 200 B.C. and in Buddhist sources from about the year A.D. 650. May be due to this very very long period, the tree has become familiar to the birds, insects and wildlife if India. 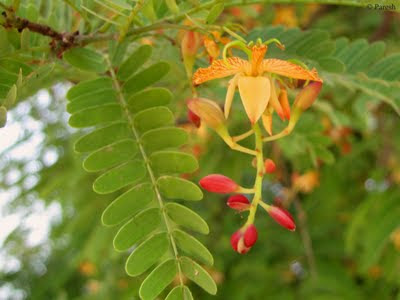 It is a long-lived evergreen tree with wide, dense crown. It grows well over a wide range of soil and climatic conditions. It tolerates a great diversity of soil types, from deep alluvial soil to rocky land & porous limestone. It withstands salt spray and can be planted fairly close to the seashore. Its extensive root system contributes to its resistance to drought and wind. The evergreen habit and the beautiful flowers make it suitable for ornamental planting in parks, along roads and riverbanks.
Just like Kokum, Tamarind is mainly used as a souring agent. All kitchens of India (especially south Indian) will have Tamarind, which is used in a variety of preparations. The fruit pulp, mixed with a little salt, is a favourite ingredient of the curries and chutneys popular throughout India. The ripe fruit of the sweet type is usually eaten fresh, whereas the fruits of sour types are made into juice, jam, syrup and candy. Fruit is marketed worldwide in sauces, syrups and processed foods. It has a high content of vitamin B (Thiamine & Niacin) as well as a small amount of Carotene and vitamin C. The flowers, leaves and seeds can be eaten and are prepared in a variety of dishes.
The soft, succulent pulp is used as a confectionery and an ingredient sherbets and beverages. The fruit is equally nutritious too; containing protein, fat, carbohydrates, fiber. The tender pods can also be eaten as a vegetable, cooked or pickled. Once the seeds are extracted and the pods removed, Tamarind pulp can be stored for several months in a compressed form. Ripe tamarind fruit has a widely recognized and proven medicinal value. The fruit is said to reduce fever and cure intestinal ailments. Its effectiveness against scurvy is well documented. It is a common ingredient in cardiac and blood sugar reducing medicines. The pulp is also used as an astringent on skin infections. It is even used as a laxative. Leaves and flowers, too, are useful as they are both edible and the leaves make a good poultice for boils; also an infusion from them makes a fine yellow dye which is used to give a green colour to silks previously dyed with indigo.
The foliage has a high forage value and is coppiciable. Flowers are reportedly a good source for honey production. It also provides an excellent charcoal. The tree usually employed as shade species or as a wind-break. It is easily propagated by seed.
Without these trees, there would be hardly any taste left..not only in our cuisines, but also in Nature! Yummy na?! :-P
Posted by Paresh Prashant Phalak